Backlist Beauties is where you can find books you might not be coming across regularly in other features, titles that publishers and booksellers love, and want to talk about.

Next in our series, Époque Press tell us about Upperdown, by David Brennan.

What we love about this book

David Brennan is a superb new Irish writer whose prose sings in a unique and beguiling way. His words draw you into the strange world of Upperdown and into a modern reimagining of The Pied Piper of Hamelin.

A little flavour of what is inside:

The stranger sucks an egg like a slug. The get up on him, like he’s the very Jack O Diamonds walked right off the card and into the café. Ancient symbols on his coat and those are symbols well known to me and me kind. His face is handsome but something repulsive hangs round him like a mist. Most men cannot see, but me, I could always see things like that.

A man with a devil inside him.

Bouncing to get out.

Morning be good to you Sir, I says I.

Takes off his hat reveals a head full of baldness and gently nods, the same to you sir. He’s working on a second egg, peeling it with delicate hands. Long thin fingers and awareness of their movement like they are part of his very soul.

Plays the piano sir, I says I.

How’d you know, he says he.

A line that sings:

“As I wait I drift in me mind hither and dither between equations, looking in dusty crooked little corners for a hint of illumination but wherever I goes I meets only dead ends.”

If you are a publisher or bookseller and would like a title to be considered for Backlist Beauties, please get in touch with ruth@wordwell.ie 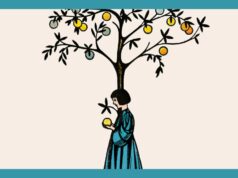