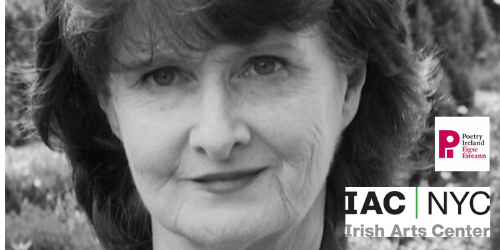 Presented by Poetry Ireland, Irish Arts Center, and the Embassy of Ireland to the United States

Poetry Ireland, Irish Arts Center, and the Embassy of Ireland to the United States invite you to join in a special transatlantic tribute to the poet, teacher, and friend Eavan Boland.
Revered as perhaps the outstanding Irish poet of her generation, Boland’s artistic imprint was truly global. But nowhere is it more keenly felt than in the United States, where she was professor of English and director of the creative writing program at Stanford for a quarter century, contributor to the New Yorker for more than thirty years, and holder of numerous other influential roles on both sides of the Atlantic.
Contributors include former President of Ireland, Mary Robinson; Mayor of Seattle Jenny Durkan; Ireland’s Ambassador to the US, Daniel Mulhall, and Permanent Representative to the UN, Geraldine Byrne Nason; Kevin Young, poetry editor of the New Yorker; novelists & short story writers Tobias Wolff and Belinda McKeon; poets Paula Meehan, Alvy Carragher, Marie Howe and Solmaz Sharif; musician Loah; and Poetry Aloud winner Michael Tient among its many guest speakers and readers from across the United States and Ireland. Hosted by Maureen Kennelly, of the Arts Council of Ireland; Rachael Gilkey, of the Irish Arts Center; and Christina Ablaza, of Stanford’s Creative Writing Program.
Free to attend but register here.