Half the time Nina would be sitting in her armchair, head tilted on the verge of sleep, boob hanging out in anticipation of a mouth to feed.

Most days she moved on autopilot—she didn’t need a wrinkled ball of a brain nor a conscious mind to get things done.

Her baby was the size of a strawberry, an acorn, a pair of clasped hands, then a small pumpkin. It was hard for her to see her as a person sometimes, the ungrown thing, eyeing her with insincere yearning, with shallow waves of hunger.

Her husband said she was her doppelgänger, that she looked just like Nina. She didn’t quite see it.

Taking the baby from her changing table, what was once the kitchen bench, Nina sprinkled copious amounts of baby powder over the infant, on her thighs and above her waist. The counter looked a country of powdered snow, burp cloth dangling at the end of the bench top like a flag waving in surrender.

Her baby started crying, fussing, so Nina moved instinctively, joints, like rivets, clicking into action. The baby was soothed once again by her sweet milk.

A phone call from her husband came through: Picking up the baby from Mum’s now, he said, shouldn’t be long. Soon after Nina received a picture of the baby in the backseat of the car, it was captioned: here I come Mummy!

Nina blinked. She looked down at the baby in her arms. The baby was in her arms. This was their baby. But so was the one in the photo. Nina gripped her hands around the child, moving to pull them from her chest, slowly, tender.

Startling her, the child bit down hard on her nipple, causing her to yelp out in pain. This was not her baby.

As if wakening suddenly from a dream, Nina bent her fingers, pinching at the mouth of the thing and ripping it from her body. She threw the child to the ground, on instinct, smacking it down like her father used to do to the possums in the backyard. She punched down the face of the child, like rising dough, pounding into it until her hands were red as the sky some mornings.

A phone call from her husband came through, a voice mangled and static and not quite real.

Nina picked up her child. The baby lay silent in her arms, the same child she had birthed. She hovered her hand beneath its nostrils, feeling for a breath. Nothing came.

She noticed then, that the baby looked rather like her as she was now—face sunken, hollow and caved, smeared with something like grief.

Helena Pantsis (she/they) is a writer with a fond appreciation for the gritty, the dark, and the experimental. More of her work can be found at hlnpnts.com 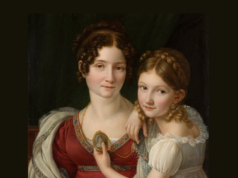 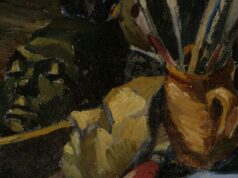 Flash Fiction—The Scar that Runs Through Your Bottom Lip, by Alison Wassell