Wild Atlantic Words Festival is to go ahead in Castlebar from October 5th to 10th.

With festivals and events being cancelled across the board, Wild Atlantic Words has come up trumps with the news that the acclaimed literary festival is to go ahead in Castlebar from October 5th to 10th.

An exciting line up of writing talent has been finalised, from book launches to short story competitions, poetry to new writing, presentations to panel discussions on all things literary.

Festival Director Kathryn Brennan says, “Having missed out last year because of Covid, and having to cancel at a late stage, we were determined that this year’s Wild Atlantic Words would become a reality, regardless of the difficulties.”

Among the festival guests on this year’s programme will be psychologist and author Maureen Gaffney, historian Michael O’Connor, journalist and writer Tommie Gorman, and solicitor Pat O’Connor.

Cormac O’Malley will launch his major new work on the centenary of Irish freedom; a special symposium will feature the recently published, ‘Men of the West’; while author Tony Lynott will open the festival with his debut novel, ‘The Chronicles of Máistir James Ronane’.

There will be readings from the winners of the festival short story competition, while the informal but ever popular, ‘A Poem and a Pint’ will open its doors to poets old and new and aspiring.

An innovation this year will be the introduction of the Festival Dome at Bridge Lane, a venue which will allow for the large numbers which the various events are certain to attract.

Said Ms Brennan, “We are delighted to be able to host all events at our new Festival Dome. The enforced curtailment of numbers at our traditional venues had been creating problems in accommodating expected numbers, but with the Dome we will be in a position to cater for much larger audiences.”

An added feature of the festival will be the looped showing of Alice Kinsella’s film of Blacksod Lighthouse at the Linenhall.

The final event of the week will be ‘Sunday Morning Coming Down’, hosted by John Healy, with guests John Chambers, Liam Egan, Joan Geraghty and . 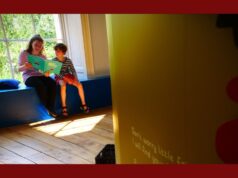