O’Mahony’s Limerick wins Independent Bookshop of the Year for the island of Ireland at the British Book Awards.

O’Mahony’s is one of Ireland’s oldest family-run independent bookshops, opening its doors at its first location in Limerick in 1902.

Since then, it has gone from strength to strength, with shops now in Limerick, the University of Limerick, Ennis, Tralee, and NUI Galway.

Lisa believes people in Ireland understand the importance of supporting independent bookshops, “especially after the last couple of years.”

“We’ve had a lot of support and a lot of feedback saying that the bookshops kept people sane, to a certain extent.”

The award, which is sponsored by Gardners and supported by the Booksellers Association, celebrates nine bookshops, chosen from a list of 63 finalists, which have continued to support their communities during the last two years.

O’Mahony’s came out on top against five other Irish independent bookshops, including Little Acorns Bookstore (Derry), Bridge Books (Dromore, Co Down), Halfway Up the Stairs (Greystones, Wicklow), Kennys Bookshop (Galway) and The Company of Books (Dublin).

“There’s such great independent bookshops in Ireland. It’s always going to be a hard choice. I wouldn’t fancy being a judge. You know, it’s so hard to choose.”

The overall winner of Independent Bookshop of the Year will be announced at the British Book Awards on the 23rd of May.

The Edinburgh Bookshop is the Scottish winner, and Book-ish is the Welsh winner. Following that, the overall winner will also compete to be crowned Book Retailer of the Year.

“We’ll be waiting to hear the announcement. You’ve tough competition then…it’s a big pool to choose from. We’re happy to get this far and we’ll have fingers crossed then for May.” 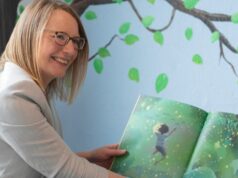 Bookshops and the geography of pleasure—an essay by Peter Sirr

The 2022 An Post Bookshop of the Year longlist announced