Everyone has a novel in them. When you, an aspiring writer, manage the gargantuan task of completing your own, it feels like everyone in the whole world has a novel too. And they’re all sitting in giant slush-piles at every publisher and literary agency across the globe, with only a once enthusiastic intern left to plough through them all.

Just as hard as writing a book, is getting it noticed.

This is what makes The Novel Fair competition run by The Irish Writers Centre so special. Each year twelve unpublished authors are chosen from a competitive field to meet with an array of literary agents and publishers. Each writer is given fifteen minutes to pitch their novel. Face to face. No slush-pile gatekeepers. Just precious time with those who can greenlight your dreams.

This year, Novel Fair 2021, I am one of the lucky ones. (Though who was it that said, the harder I work, the luckier I get?) My novel, The Dead Muse, was selected as one of the twelve.

As it happens, this isn’t my first time to be chosen. Which is both a badge of honour and an added pressure. My first unpublished novel was chosen in 2015. I remember the excitement (terror?) Each of us positioned at our desks in the Irish Writers Centre’s beautiful Georgian rooms, pitching our hearts out.

I’d begun that novel when my youngest child started in pre-school. Each morning after she was dropped off at the school door, I would rush to a nearby cafe where I’d spend a precious three hours each morning writing. I couldn’t believe it when it not only was picked for Novel Fair 2015, but my sales pitch paid off.

One of the publishers who came along that spring day liked the book and offered me a contract. It was that part in the movie where the birds start singing and little creatures help you with the laundry. It’s the part of the book where the hero works out whodunnit and saves whomever needs saving. Except the movie had another twenty minutes to run and the book had a whole chapter left. Having clambered to the top of the slush-pile, the publisher experienced financial problems and I, and a lot of other authors, found ourselves once more with only our mammies telling us how great we were. And sometimes mine didn’t even sound that sure anymore.

I discovered the poem If by Rudyard Kipling in first year in school, and like scrunchies and Morten Harket from A-ha, I’ve been fond of it ever since:

“If you can bear to…watch the things you gave your life to, broken, And stoop and build ’em up with worn-out tools…”

These lines were my comfort in that post-publisher wilderness. To have come so close was tough.

By the time this all happened I was writing another book. I had also gone back to college, full time, to study Illustration. And those pesky kids still needed feeding and clothing. There wasn’t much time left over for wailing and gnashing of teeth. So, I made a plan. I’d finish this new book. Finish college. And then start climbing Mount Slushmore once again.

But things are never that simple. The minute I wrote ‘The End’ on The Dead Muse, I realised it could be bigger, more ambitious. And if you’re a writer worth your salt you’ll listen to your gut and go back to the beginning. By this point though I’d added another string to my over-strung bow and was now designing book covers as a day job. Kids, writing, designing—there never seemed to be enough time.

Enter March 2020. My day to day, like a lot of people’s, went quiet. And in that time I began to write. And write. Till 4am most nights. September 2020 came and the deadline for submission for this year’s Novel Fair came round. I couldn’t bear to tell anyone that I was entering again, so I polished my 10,000 words and plot synopsis and entered it online, without breathing a word. No mad dash this year to the Irish Writers Centre to place it into careful hands, with a last minute check that everything was included. Instead, I clicked upload and off it went. Then, while I didn’t quite forget about it, I got on with finishing my book and trying like everyone else to muddle through these difficult days.

Unlike the first time I was picked, when I hadn’t noticed they told you the date the results came out (and so had spent a lovely day in blissful ignorance until I got the phonecall), this time I knew the day, if not the hour. The mobile was either in my hand being stared at, or was hidden away to see if that would help. The two writer friends who I’d finally let in on my secret were texted with anguished it’s not going to happen on the quarter hour.

And yet, in the end, somehow, I managed to miss the call.

I picked up my phone, to move it, and was stunned to see a missed call. With fingers shaking so much I don’t know how I checked my voicemail let alone rang back the Irish Writers Centre—I somehow got through to the lovely Betty Stenson of the IWC. She delivered the good news. I’d gotten my second shot.

This Saturday gone was Prep Day, where the writers gather before the big day and get to meet the judges who picked them—this year Madeleine Keane, Rick O’Shea and Yan Ge. Pitches are prepped and polished, and all are made to feel good before the terror of meeting those scary agents and publishers in person (I’ve heard they bite!). The difference this year was that I attended at my kitchen table —kids and cats forbidden from entering—as we all convened via Zoom. The Novel Fair team did a brilliant job, corralling recalcitrant tech, and it all went off without a hitch.

And so, it follows that the day itself will also be online. This time there won’t be a buzzing room at the IWC, a nervous hub of writers pitching and charming and remembering to breathe occasionally. No bell to punctuate each fifteen minute mini-interview prompting the next agent or publishers to sit down in front of us, a friendly and welcoming face, (oh yes, I remember, they don’t bite at all), willing us on. The only bell I’ll hear this year will be my own doorbell (that blasted package from the UK will probably finally turn up just as I am mid-murder with the lovely people from Hachette). The chatter will come from the birds outside.

But as different as it might be, I am quite sure it is going to be just as brilliant as before: exhausting, mind-bending—but such a fantastic opportunity to introduce my book, and myself, to people who might just transform my world.

Tríona Walsh is an aspiring novelist from Dublin. During the day she designs book covers and creates illustrations. At night she’s been responsible for more deaths than a serial killer convention as she crafts her crime novels. @TheTrionaWalsh 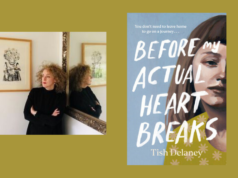 Before My Actual Heart Breaks: Tish Delaney talks about her debut novel 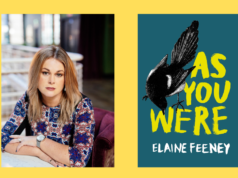 “The black mirror of the internet, doom scrolling and fractured soliloquies”—Elaine Feeney wins the Kate O’Brien Award with debut novel As You Were