I wish I’d known, long before now, that sowing is a way to grieve.

As hands scatter seeds into earth beneath feet, they are really sculpting loss.

With careful, repeated movements, the hands are moulding it into a thing like light on stone.

For as long as I’ve been able to name the days & months – to observe their colourful, untameable lexicon; the glistening, aching cycle of seasons in this growing, dying, turning world – I have struggled with the month of April.

It sneaks up on me like the name of someone long lost in the soft pink dawn of morning. It’s like the shipping forecast on the radio in those moments when sleep will not come . . . I know its beauty is there, right in front of me but (for reasons too sore and echoey to give voice to) I am unable to access it. I find myself cowering silently instead; unable to hear anything above lonely gaps in between dancing words – not yet able to see the light falling on foggy place-names – the green growth that unfurled, noiselessly, inside the winter’s darkling grip.

I know that for this corner of the planet April means the land’s shift towards an unknowable horizon; a season, like a place, that we can never quite pin down. Spring – well I know – is supposed to be a time of new beginnings, of hope, of light. But the thing is, life does not quite always tick along in the way we might will  it to, and many of us find ourselves – at points of the year’s circle when we imagine we should feel this, or that – feeling another way entirely.

The most difficult things I have experienced have all happened in that fourth month, things that spoke to me in no way of rebirth or joy; things that spoke instead of loss, of endings, of grief that stung and bit.

From a young age I have been the kind of person that wills away the spring; its transitional, slippery nature has always felt a bit too close to the bone for me. I’m distrustful of its liminal, hidden ways.

2020 delivered an April – to both sides of the equator– quite unlike many of us had ever  known. Many of us had sensed, for a stretch of varying lengths before then, that things were shifting in the outside world. I had felt something amiss on my  isolated laneway, in the very heart of Ireland, just before Laethanta na Riabhaiche, ‘the borrowed, skinning days’ that mark the end of March and the beginning of April in old Celtic lore.

The news was confusing, grew harder to decipher with each passing day, and the outside world’s chaos mirrored changes that had gone on beneath my own skin; in places – like the soil’s strata – that you can’t really see.

After three and a half decades constantly on the move, from one rented space to another, a lifetime spent running with all that I could carry in my arms, I had found somewhere where I knew I’d be able to stay.

Two months before the pandemic reached us here in Ireland, my lover and I moved into a small stone railway cottage he’d been left the year before. It was a wreck, in need of more work than we were sure that we could manage – but when we’d first gone to see it, more winged creatures filled the sky above the overgrown garden than I’d ever seen before. Creepy crawlies & bats, damselflies & moths, things we didn’t even have the names for. We didn’t need to say out loud that we’d both fallen for the place hard. As 2019 drew to a close we sold most of our things, left all we knew behind, and hunkered down for winter on a muddy, isolated laneway in the middle of Ireland. Storms raged at the house, the garden and us for the first months. When the storms eased, the pandemic took their place in rattling the outside and inside worlds.

Lockdown came, and my lover set at the brambles and thorns in the wild space behind the house with any tool he could get his hands on, clearing and making space. Having never lived anywhere for any proper period of time, I had no idea what to do in a garden. If I’m honest, I was reticent at the start. If I’m truly honest, I was terrified. I’m someone who has had to make peace with loss; with being forced  to leave space after space, places that I never really quite knew how to grieve.

How does someone learn to stay?

To give their body over to a small stretch of land? What does it mean to tend to a garden, when so much pain has been inflicted in our world when it comes to land?

We were not alone in throwing ourselves into the small stretch of land we could suppose to call ‘our own’ this year. My social media threads were full to bursting with people placing their hands into the soil, trying to quieten down the cacophony of the unfolding news. It felt as clichéd as any of us could really imagine, but as the world outside became more and more scary, rather than hiding inside, many people entered deeper into the earth’s hidden folds. A funny old mix of gratitude and guilt swam inside my belly, and again I don’t think I was alone. That some were stuck, lonely, surrounded only by bricks and strangers, broke my heart afresh each day.

What gave me the right to stand among birds and brand-new life, green and hopeful?

I had less than no clue what to do. The when, the how, the where of it all. Despite the excitement it overwhelmed me – in ways I found too hard to really talk about back then. After weeks spent raising the handful of seeds I’d been lucky enough to get my hands on, one freak storm halfway through the first lockdown lifted my flimsy plastic ‘greenhouse’ and hurled it against the boiler; practically everything I’d nurtured into being was lost. I posted the pictures of the scene on Instagram, seeking some kind of response from people I mostly haven’t even met. I could make no sense of it: the obsession & the torment, the desire & the peace it all brought, somehow. The responses were all from women. Some I ‘knew’ already, many I didn’t. Every single one of them was soothing, encouraging: full of goodness. And full of something else, too. Full of sharing. Lettuce & radish seeds arrived from Bournemouth with love and with crockery. Wildflower seeds for the bees from Brighton, deadly nightshade and an art-deco postcard from France, cosmos and a hand-made ring from Bristol, honesty seeds from Orkney.

So much more than seeds was being passed between us.

We shared, from our tiny, back-lit screens – in various degrees of lockdown and of heartache – tips & images, resources & timeframes; our gardens felt like almost womb-like spaces. Places we might feel held; spaces outside of the normal confines of place or time. Being there, no matter what we lost, no matter what blows we and the garden suffered, gave so many of us a means of feeling buoyed, as well as a way to feel set free, and so much less alone than we really were. We were almost on a shared allotment, or a row of gardens on the same street; something about the posting of seeds, the giving of advice, the commiseration after failure felt primal, beautiful.

I read, again and again, how people now recognised the garden as somewhere that held the potential to imagine things coming along; things they might long have taken as impossible. How it might hold you close, as you realised – through bone-achingly tiring, rhythmical work – that you felt differently about things than you had before you began.

Many of us have carried much, so much, into the hidden places within our gardens, and other spaces, in these last seasons. For an unfathomably long period of time, the only other person I set eyes upon was the one I lived with. But I felt less alone than I had for most of my life. I tried to record those early days, as best I could, as a way to remember those oddly boned days; in that year like no other.

Published with the kind permission of Daunt Books. This extract is from the essay Solas, Solace by Kerri ní Dochartaigh. You can find it, and more, in the collection In the Garden: Essays on Nature and Growing (Daunt Books). Her novel, Thin Places, is published by Canongate. 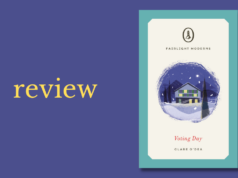