The other man stared back at him in the mirror.

He hadn’t seen him for a while, a month maybe, but he knew he’d be back sooner or later. He always came back. His wife called it ‘his period’. He called it nothing. It didn’t need a full moon, high tide or a professional setback to surface. It came at random, from darkness or light, at angles impossible to predict, and it stayed for an hour or a month if it wanted.

Well, no, maybe not a month. A month could kill him.

Their ancient cat Arthur stretched himself awake on the bed behind him. He watched the cat watch him in the glass and wondered if he saw it too. The other man. They say animals have a sixth sense but he suspected Arthur couldn’t sense his arse from a hole in the ground—the poor bastard couldn’t find his own food dish anymore.

The house was empty but soon it wouldn’t be. The world would come in soon, dangerous, filthy and out of control; the kids and their friends, books, snorting wildness and joy, and it made him ache, but it made the other man ache even more. Ache from a different place—a place that remembered what it was like to be that young.

He feared the other man would come and cut his kids in half if he got at them. He’d slip inside that fog, that wink between waking and awake, like a blade-finned eel, and wait till his kids were alone.

He dreamt that the other man danced with his wife once and he’d woken to see her smiling.

The next day, lunchtime, he walked past the odd new place—incense, crystals, five long minutes to kill and the sky losing light by imperceptible shades, he entered.

‘Good Afternoon,’ came a voice from a counter.

A hand held it out, a small glass stone, black, shapeless, like something blown from smoke.

‘It’s not for you,’ the hand insisted, and he dropped it in his palm and went away.

He showed it to no one. Made dinner for his wife. He loved her more now than he did thirty years ago, a mystery greater than music, then he kissed his kids and read them stories they loved, and when they were asleep he buried his nose in their hair and inhaled their softness.

He showered and wanted to wake his wife, tell her something, but she was asleep and he couldn’t wake her. She worked harder than she should.

He went to his coat, rain teasing the panes.

The stone was gone.

He tore the house apart looking for it, but couldn’t find it.

A filthy demented pearl, he wasted his last years divining its fathomless insignificance.

Anthony Brophy is an actor and writer. His first play Chicane was shortlisted for the Stewart Parker award, and his first two novels Summer of Stan and The Vasectomy Kid Rides Again were both long-listed for the Irish Writers Centre Novel Fair. 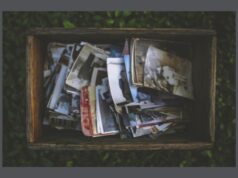