To Go or stay? Excerpt from Brendan Lynch’s memoir, There Might Be a Drop of Rain Yet

It was 1961 and he was going nowhere on his four pounds ten shillings a week.

Politicians relived the civil war, while over 50,000 a year emigrated. He had no choice but to join them. Only England would offer him a decent job and some hope for the future.

His parents arrived unexpectedly. His mother was quieter than usual.

‘I can see you’re still discontented,’ his father looked around the bedsit. ‘We all have to put up with things we don’t like. It isn’t easy for me, keeping order without favouritism among people I see every day. I could have gone to America with my sisters but I felt I had a responsibility to stay and serve our new country. There’s more to life than money. You have to make your own decisions but think carefully before you do anything rash.’

A light-reflecting symmetry of tall windows and fanlight tracery, the elegant backwater of Upper Mount Street was to be his final Dublin address. Flanked by the Pike Theatre and Liam Miller’s Dolmen Press, its canal entrance led into a singular Georgian enclave. A spacious and private world of mellow brickwork and gracious granite steps, girdled by wrought iron railings and swan-necked streetlamps.

Nestling between the Pepper Canister Church and Merrion Square, he woke each morning to the horse’s clip-clop and the glockenspiel of milk bottles.

Actors and artists such as Patrick Pye, Elizabeth Rivers and Camille Souter packed the throbbing Bohemia, which matched his Murger mood and smuggled Henry Millers.

Instead of being authors he read, writers were people he met on the expansive Georgian shores. Brendan Behan lived around the corner. John Montague, Aidan Higgins, Thomas Kinsella and Petronella O’Flanagan regularly floated by. His friend Jimmy looked out the window: ‘Jasus, it’s Myles na Gopaleen under that hat.’

The unassuming balustrades of curving Huband Bridge and its eternal cataract buoyed him on many an evening. And to complete his joy, Parsons redbrick bookshop beamed culture from the crest of nearby Baggot Street Bridge. Paint had never desecrated its creaking floor or wooden counter. Sunbeams spotlighted the dust which danced on such regular customers as Behan, Kavanagh, Ben Kiely, Liam O’Flaherty, James Plunkett and artist Elizabeth Rivers. And short story writer, Mary Lavin: ‘Parsons is my parlour.’

‘Come for a picnic. I’ve made a salad and bought this with my allowance,’ Trinity student proferred a bottle of Riesling one sunny Saturday morning.

‘My very first alfresco,’ he cradled the wine and food, while she carried the glasses and an inviting red rug. They strolled up Baggot Street, past the Doric-columned Christian Science temple and turned right onto the canal. ‘Steady with the cargo,’ she waited as he swayed across the unprotected Mespil lock footbridge.

‘Once more to walk in summer along the canal,’ he stepped onto dry land.

‘Patrick Kavanagh – a rare species,’ Muriel spread the rug on the grass surrounding a recent subsidence inlet. ‘A forthright Irishman, as well as a wonderful poet.’

Muriel had been to Paris for Easter: ‘Art and culture inhabit every corner. Many Irish writers adjourned there too; Beckett, Joyce, James Stephens, Oscar Wilde.’

‘The city of my dreams, of Abelard, Hemingway and George Moore. And artists Paul Henry, Sarah Purser and Nuala O’Donel, who died there in 1911 because of Rodin’s indifference.’

‘You know more about it than I do. But don’t let it remain a book interest. Don’t complain like your pub-bound friends about your lack of freedom. Break out! Go and explore and express yourself before you also succumb to suffocation or cirrhosis.’

‘All I need is money,’ he surveyed the tree-lined banks stretching to the bridge on Leeson Street.

‘Making decisions is harder than making money,’ Muriel topped up his glass.

She was right. It was entirely up to him. Only he had command of his destiny. Possibilities suddenly opened up before him. There was a big, wide world out there to be savoured and see it he would. Leafy patterns danced on their rug. It was a day to be alive. A day for making grand plans. A familiar figure approached the opposite bank from Wilton Place. Frank O’Connor studied Patrick Kavanagh’s favourite throne of modest bricks and wood. The sun haloed his white head as he turned left for Parsons Bookshop.

‘I pronounce this place Paris Bay, from which my great voyage will soon commence,’ he drained his glass on their picnic site. He loved Dublin, but for how much longer would he resist the temptation of England and travel? Someone would soon have to make a sacrifice, his mother or himself. 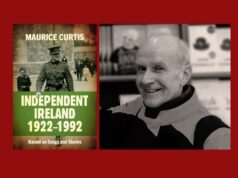