My father was a bank manager and, when a young official, he changed some dollars for an Irish emigrant back on a visit from America. When he got his notes and change the emigrant said, “When you were making your coins, why did you make them so goddam heavy?” It was true: the old pennies and half-crowns were heavier than the smaller dimes and quarters. In a flash of wit my father quipped, “I bet you wished your pockets were heavier when you first went out there!” Here is the “Returned Yank” in full Technicolor, brash, boastful, but out of touch and insecure. Many indeed were like this but what David Fitzpatrick’s refreshing study of two-way migration investigates and recasts is a wider, more disparate and richer picture of movement in and out of Ireland from pre-Famine times to post-Independence.

The traditional narrative of Ireland as predominantly rural, insular, unindustrialised, hostile to extraneous influence, has been queried for some time. Fitzpatrick points out that there is a “reverse flow in emigration” where more than remittance money is handed back, namely “taste, sentiment, skills, values”. The most potent of these reverse feedbacks was American, and these helped to mould and form Irish society. He points out that the term Americanisation is intended as a provocation and wryly comments that if it had been successful then the ‘s’ in the term would be replaced by a ‘z’. He dwells on Leitrim, the county of his ancestors, defending his method by suggesting a snapshot can reveal as much as a panorama. He talks of a neglected, cosmopolitan presence here, one composed of people of Irish or British descent, born in places as disparate as India or Italy. The staggering figure of seven million people left Ireland between the 1840s and the 1920s.  The funding for this came in turn from the emigrants themselves, sibling bringing sibling, particularly to the US. Plainly this could only generate a “relentless backwash”. Thus the caricature of the Returned Yank joined the spoiled priest as a figure of often unfair ridicule. But this is excessively folkloric. Many returnees were in their mid to late twenties and must have anticipated and surely enjoyed a favourable future at home.

Fitzpatrick dissects census figures and notes those distorted by transients such as Norwegian seamen in port for the night of the count. There are curious findings such as 37% of the 227 working Italians in Ireland in 1911 were musicians or music teachers, showing a level of affluence that could support them. Many of the others were classed as ice-cream vendors. Many of the “Russians” here were in fact Lithuanian Jews (sometimes styled Litvaks) working as pedlars and soon to form a valuable and more professional community. Those classed as Indians were not differentiated by race, whether they were returned colonials or Tamils for example. The greatest number just before World War I was 13,000 Americans, maps of their residence by county being provided. There are ten pages of tables showing their occupation and religion, many being white collar or middleclass, a case of plus ça change as we glance back. These figures become animated as they are more closely identified in the sections titled America on Show, displaying “a cascade of names, facts and oddities”, concerning clerical, commercial and official pursuits. Under Commercial we find Americans (including Canadians) involved in “”drapery, pigs, art and millinery”.

Many addresses turn up in these pages still very familiar to us, streets where we may have worked or lived. Census lists contained the number of rooms in a house, and windows too, but bizarrely only those at the front. Photographs cover twenty plus pages and these range from family portraits to more earthy characters such as a blacksmith who is a ringer for Dan Breen who followed the same trade. Fitzpatrick comments on these with a novelist’s sharp tongue. Several pages of photos taken by Harvard ethnographers attempts to characterise the portrayed Leitrim men as ethnic  “types” in a long discredited fashion, reproduced here as a curiosity. The late David Fitzpatrick was a TCD historian who has bequeathed us an original and meticulous study. When a historian dies a light goes out not just in the present but one that shines back into the past as well.

Rory Brennan is an award-winning poet and former Director of Poetry Ireland. 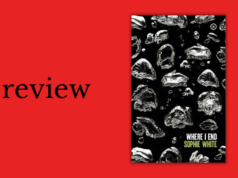 If men did pregnancy, more horror would look like this—Where I End, by Sophie White 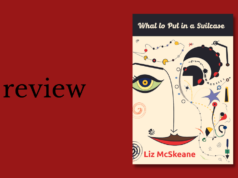 A skilful and spare anthology—What to Put in a Suitcase