The Ballycotton Job tells a story that could make a riveting film. In March 1922, the Royal Navy ship, HMS Upnor, was hijacked by members of the IRA on a voyage from Cork to Plymouth.

A cargo of about 120 tons of arms and ammunition was captured, including machine guns, rifles, pistols, explosives and ammunition. (Exact estimates vary but, by any standard, this was a very substantial horde.) The cargo was landed at Ballycotton, about 25 miles east of Cork, and was unloaded by several hundred volunteers.

History of the IRA

The book is, however, more than just the story of this one incident. It is also a history of the IRA in the Cork area in the period 1916-23.

It highlights the two leading figures in this episode – Seán O’Hegarty, the Commander of the Cork Number One Brigade, and Admiral Sir Ernest Gaunt, Commander of the Royal Navy in Ireland and based in Queenstown (the modern Cobh).

O’Hegarty was an unimpressive figure in the flesh; ‘small in stature, with an unhealthy sallow skin, thinning hair, a heavy black moustache and bat ears and dressed in a cheap suit…a strict disciplinarian – a non-smoker and non-drinker – who abhorred drunkenness.’

He was the dominant figure in the IRA in the Cork area after the 1916 Rising. He led attacks on the Army, the Black and Tans, the Auxiliaries and the RIC (Royal Irish Constabulary).

He masterminded ambushes and raids on strategic points, such as the Royal Cork Grammar School for rifles used by the officer training corps and the Cork jail to release an IRA member from imprisonment.

He dealt ruthlessly with informers; ‘at least twenty-seven suspected informers were executed in the city, not counting killings in the brigade area outside of the city and many   unexplained ‘disappearances’’.

The most controversial was the killing of an elderly widow, Maria Lindsay, who had given information to the RIC.

Admiral Gaunt could not have been a bigger contrast. ‘A pillar of the community’ could have been a term devised especially for him.

Born and raised in Australia, he was sent, aged twelve, to enrol in the Royal Naval Cadet School, HMS Britannia at Dartmouth. He had a globally successful career, despite being badly wounded.

According to him: ‘No other life can be compared to that of the Royal Navy; the traditions, the atmosphere, the necessary day and night watchfulness and the aloofness set it apart from similarity with any other body of disciplined men’.

A continuing theme throughout the book is the tension between the IRA in Cork and Michael Collins, based in Dublin.

He was admired as ‘a towering figure of the War of Independence’, but critics, such as O’Hegarty, had a number of complaints. Collins raised large sums of money in government bonds and through fund raising, mainly in the United States. It was felt that too little of this made its way to Cork in the way of funds or arms.

The Collins life style grated with some; a man who often did business in pubs; eating in expensive restaurants; staying in luxury hotels; delighting in the company of pretty women; and generally enjoying the craic with the lads.

Where did the money for all of this come from? Even more serious were the innuendos sometimes made, especially after Collins became the leader of the Pro Treaty faction; how did he regularly escape being captured and questioned by the British? It comes as no surprise to learn that O’Hegarty was initially opposed to the Treaty, which was signed in December 1921 and led to the Civil War, ending in May 1923.

The capture of the Upnor (28th – 30th March 1922) is told in graphic and exciting detail. Its meticulous planning was helped by insider information. The plan was simple; a ship, the Warrior, was hijacked and used to intercept the Upnorand seize its cargo. It was successful – after some heart stopping moments – and surprise was complete; a difficult landing was also achieved.

The research for the book is extensive (the author is based in Honolulu) and the Bibliography is a long and impressive one. The author’s grandfather, Tom, was one of the team, that seized the Upnor.

The writing is lively and populist but occasionally lapses into tabloid. This is the first Irish history book that I can recall with a chapter heading, ‘Bugger All’; this describes the author’s views of conditions for the IRA in Cork in 1921!

Another one, ‘The Fecking War is Over’, is at least based on a quotation from one of the participants, Mick Murphy. (Mahon explains in the introduction that he deleted all expletives from reported conversations. O’Hegarty in particular was very prone to extensive swearing.)

He also admits to doctoring some of the quotations used in the book. ‘In a small number of situations, I’ve inserted dialogue based on statements, phrases and words associated with the participants in other situations.’  In a few situations, he admits to ‘limited reconstruction of dialogue’.

Sometimes, I felt that incidents were embellished or added to for effect. Thus, for example, when Admiral Gaunt is described as learning on the morning of the hijack: ‘At eight o’clock…quietly slipped out of bed so as not to disturb his wife…muttering to himself that the house was miserably cold and draughty…having put on his uniform, neatly laid out by his valet…he ate alone: scrambled eggs, bacon (crispy) and kippers and a pot of tea.’  How accurate really is this detail? How crisp was the bacon on that day?

Ironically, towards the end of the Civil War, O’Hegarty began to agree with Collins’ position on the Treaty. Mahon comments controversially: ‘The one time in his life he decided to back down it was the right thing to do and he knew it.’

Having stated my few grumbles, I very much enjoyed reading the book and finished it in a continuous read on a sunny afternoon!

John Kirkaldy has a PhD in Irish History, worked for many years with the Open University and has been reviewing for Books Ireland since 1980. He has contributed to three Irish history anthologies, a school textbook, and has been involved in a number of Open University History documentary series. Aged 70, four years ago, he went round the world on a much delayed gap year described in his book, I’ve Got a Metal Knee: a 70-Year Old’s Gap Year. 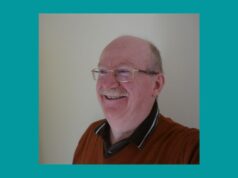 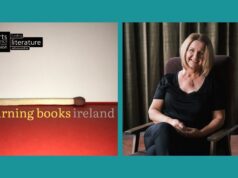 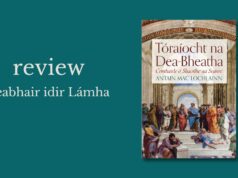