Under the Influence—a living stream of art

The idea of Under the Influence is that twelve writers will consider and respond to the influence of other writers on their work.

On the face of it, this might present an easy opportunity for writers to promote heroic liberation from an influential predecessor or to show the false humility of a self-declared lesser, all of which might make for dull artistic navel-gazing.

This is not what happens in Under the Influence. Under Joanna Walsh’s editorship, these pieces grapple in surprising ways with the nature and meaning of influence within the living stream of art.

The success of the book lies not just in astute, intellectual and playful contemplations of influence; it is also that the essay form itself is squashed and stretched, sometimes to the point of unrecognizability. There is a sense that another type of influence is being explored – the inheritances of literary genre – for here the boundaries of the essay are tested.

In her short introduction, which manages the rare feat of being a lucid piece of post-structuralist wordplay, Walsh provides some context for how she encouraged her authors to approach the task: to be under the influence means to be ‘in an intoxicated condition’. To be influenced, therefore, means to be in a state of drunkenness where fluency is increased but where it can be difficult to write.

To put this another way, the inescapability of influence both enables and erases the artistic self.

This destabilising tension allows for experiment with the traditional essay—to take risks, to be pulled in different directions. Such encouragement speaks both to the nature of influence and the challenges of writing about that influence: as Walsh says, an essay ‘simultaneously demands [authors] construct the trap from which they are trying to escape’. This statement tells us that these pieces are not going to be dry ramblings in standard essay form. Instead, they will be acts of (self-) creation born in the light and shadow of influence. For this reason, Walsh tells us she did not want writers who were essayists alone, but those who would provide a creative response.

The opening essay by Lauren Elkin references her background as a classically trained musician. Music becomes a metaphor for writing ‘under the influence’: the ‘right kind of influence turns a text into a kind of tuning fork’; the tone of influence should be audible to the writer but not to the reader (one suspects that this is more easily said than done).

The writer Elkin has turned to repeatedly for this tone is French writer Annie Ernaux: through Ernaux’s influence, ironically, Elkin finds her voice. Under the Influence quickly switches genre: in his brilliant, absurdist story, Fernando Sdrigotti’s ‘Nothing Ever Happens / Everything Happens All the Time: Martín Rejtman by Martín Rejtman’ (what a title!) is filled with doubles, döppelgangers. Rejtman is an influential filmmaker in Argentina.

In this story the aura of authenticity is difficult to establish, everything is facsimile: the power of Rejtman’s influence is to produce reality itself.

While none of the pieces are particularly lengthy, there are some short, humorous contributions. Roman Muradov’s nine panel illustration ‘Waiting for Jason’ is an amusing play on the influence of Norwegian cartoonist Jason’s deadpan style. Deborah Levy’s slight piece on Guillaume Apollinaire – the one-line statement ‘YOUR INFLUENCE IS ALL OVER ME’ – is a descending, sloping calligramme. These brief contributions – are they in some way articulations of the strangulations of influence? – have their place.

Others use fragmentation and disruption to explore influence, such as Eley Williams writing on the English novelist Bryher (the nomme de plume of Annie Winifred Ellerman) and Anakana Schofield on Beckett and Berger.

Williams essay is interspersed with irrupting quotations while Schofield’s mobilizes a combination of short text and blank space, signifiers of struggle.

I should tell you I am writing this in the shape of John Berger’s essay Cataract.

Why? Because the intention is influence and I cannot write of influence unless I write under       the influence.

This is as much a personal statement as it is political. The collection explores the larger question of historical authority—for example the excellent investigation by Isabel Waidner into the influence of Brigid Brophy’s novel In Transit (‘a proto-queer comment on gender as a linguistic and sociocultural affect’) on Waidner’s book Gaudy Bauble (‘a riot of all things queer’). Elsewhere, the influence of colonization on language and identity is considered by Vahni Capildeo in ‘The Wrong Kind of France’, another essay which adopts a fragmented style. History – the largest type of influence – is encapsulated in writing. It is, for Capildeo, ‘Ink. Ghosts Alive.’

In putting together Under the Influence, Walsh encouraged her contributors to submit writing that ‘leaves the ground’. There are some adventurous essays in this vein – Sam Riviere’s ‘Translating M.’ and Rachel Genn’s ‘Pulling’ – the latter ‘about’ language and about ‘being in’ language is a really fine example of creative criticism.

Two outstanding essays are Dimitra Xidous’ raw, brave and honest essay-poem that traverses the nature of memory, intimacy, sexual desire, failure, the body and influence, and Owen Booth’s ‘Play from Current Slide’, which is an exceedingly clever and innovative meditation on the intersections of technology, corporatism and creative practices. Focusing on Robert Gaskins, the creator of PowerPoint, Booth’s contribution is a mixture of essay, illustration/visual art, and aesthetic self-reflection.

Risk is a fundamental element of the essay.

After all, the word essay comes from the French word essayer, to attempt. As Walsh says, ‘risk means that any essay is also subject to the possibility of failure’. The writers here come face to face with failure and accept it as the condition of their artistry. That open and honest encounter is integral to the triumph of Under the Influence.

Eoghan Smith is the author of The Failing Heart (Dedalus 2018). His second novel, A Provincial Death, will be published by Dedalus in 2022. 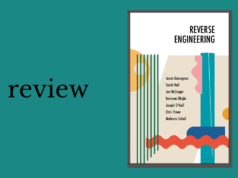