Roberta Beary has won joint first prize for her poem After You Self-Medicate with Roethke’s The Waking Read by Text-to-Speech App in the prestigious Bridport Prize.

Beary shares the £5,000 poetry prize with Chaun Ballard from Alaska.

Books Ireland is pleased to have published Roberta Beary’s Amulets, in our spring flash fiction feature earlier this year.

The winning poem has had a bumpy journey, being initially rejected not once, not twice, but sixty times before finally finding a home—and first place—in the Bridport Prize.

However, having been a single parent, working in New York, Washington DC and Tokyo as a Finance Attorney, Beary is a firm believer in not giving up.

“Life’s vicissitudes keep coming at you but have to keep going. Even if you don’t know you’re going forward—you are.”

The competition’s judge, Inua Ellams described the poem’s “halting, startling imagery” and its engagement with “feminine interdependence and maternal love” as the reasons it stood out.

Beary’s work has appeared in the New York Times Modern Love series and she is the Haiku Foundation’s roving ambassador in the UK. She lives in Westport, County Mayo with her husband, Frank Stella. 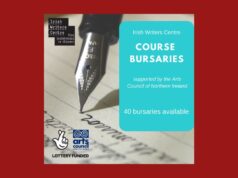